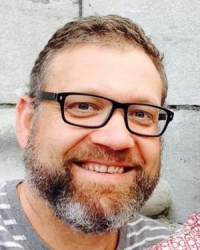 Steven Goodreau’s research has two related themes: how does the complex biobehavioral ecology of HIV produce disparities in disease burden within and between populations; and how can we make more statistically sound use of social network data to understand the structure of populations and the flow of infections or other entities within them? Since joining the UW faculty seven years ago, he has published on these topics in Demography, AIDS, the Journal of the American Statistical Association, Genetics, Social Networks, the Journal of Infectious Disease, AIDS and Behavior, and eight others. Goodreau currently has five ongoing projects. The first, part of NIH’s Modeling Prevention Packages Program (MP3), aims to identify ways to better package and target HIV prevention interventions for men who have sex with men (MSM) in the Americas. Within this large multidisciplinary team, Goodreau is director of the modeling group, which is analyzing data on sexual behavior, demography, testing, and treatment among MSM in the US, Peru and Brazil; and using these data to parameterize dynamic HIV transmission network models to explore the potential impact of a host of biological and behavioral intervention packages. The second project, funded by the Gates Foundation, entails extending this analysis to MSM in India and Kenya, to begin developing a more refined comparative understanding of the nature of MSM HIV epidemics globally. The third project, Metromates, integrates behavioral data on post-HIV-diagnosis behavior change among MSM with virological data on acute infection into network models to explore the potential impact of different HIV testing strategies on reduction in risk behavior at the point when men are most infectious. The fourth project, just beginning, extends the work that the Social Network Modeling Group (also including Martina Morris at UW; Mark Handcock at UCLA, Carter Butts at UC-Irvine, and Dave Hunter at Penn State) have done over the past decade on developing user-friendly statistically grounded models and tools for social network analysis. The group’s current R packages (www.statnetproject.org) will be expanded to incorporate additional dynamics, forms of missing data, and epidemic modeling tools; the project also has a strong emphasis on providing training in these tools. The final project, A Kenya Free of AIDS (Martina Morris, PI), is a capacity-building grant for HIV prevention in Kenya; Goodreau’s role is to train African scholars in epidemic modeling so as to be better consumers of the literature that plays a major role in determining prevention and care priorities in sub-Saharan Africa, using a variety of novel pedagogical approaches that he and Dr. Morris have developed.