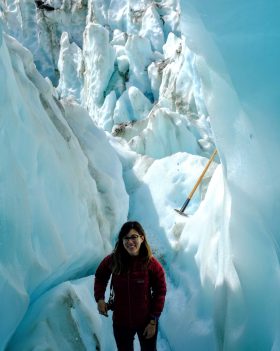 Mia Bennett is an Assistant Professor in the Geography at University of Washington. As a political geographer with geospatial skills, through fieldwork and remote sensing, she researches the geopolitics of development in northern frontiers, namely the Arctic, Russian Far East, and along the more remote corridors of China’s Belt and Road Initiative. She has conducted fieldwork along the Inuvik-Tuktoyaktuk Highway in Canada’s Northwest Territories and is particularly interested in the role of Indigenous Peoples in leading infrastructure development in the North American Arctic. Mia received a Ph.D. in Geography from UCLA, where she was a National Science Foundation Graduate Research Fellow, and a Master’s in Philosophy in Polar Studies from the University of Cambridge, where she was a Gates Scholar. She has published extensively in both peer-reviewed journals and popular publications and edits a long-running blog on the Arctic at cryopolitics.com.