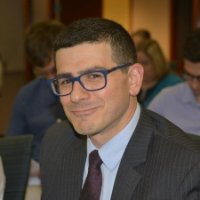 Benjamin Cerf an economist in the Center for Economic Studies at the U.S. Census Bureau and a Regional Research Affiliate of the Center for Studies in Demography and Ecology at the University of Washington. His research uses linked administrative and survey data to investigate experiences of marginalized populations. The first branch of his work investigates several aspects of U.S. antipoverty programs such as the Supplemental Nutrition Assistance Program and the Earned Income Tax Credit, including non-participation, multiple program participation, and misreporting of participation in surveys. He has presented work using SNAP administrative records at meetings of the Association for Public Policy and Management, the American Statistical Society, and the Society of Labor Economists. Another branch of his work focuses on the demographics and labor market outcomes of transgender individuals living in the United States. This work has been presented at the Population Association of America and the Society of Labor Economists and was written about in the New York Times.

In addition to his scholarly research, Ben has been the lead developer of several products the Census Bureau provides to partner states that share administrative data from the SNAP, WIC, and TANF programs. His work in this area has involved working closely with representatives from states and other federal agencies to identify and address critical information needs, develop scalable suites of statistical programs to automatically generate reports, and communicate results to a wide variety of stakeholders.