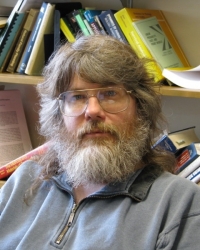 Darryl Holman is an Associate Professor in the Department of Anthropology (Biocultural program), and an affiliate of CSDE and the Center for Statistics and the Social Sciences. His research lies at the intersection of biological anthropology and population studies, integrating traditional microdemographic methods with biomarker and statistical models of biocultural processes (Holman 2000b). His research on age-specific total fecundability and total fetal loss in Bangladeshi women (Holman et al. 1998, 2000; Holman and Wood in press) establish that total fecundability is constant across most of the reproductive lifespan, and that the observed age-related decline in apparent fecundability results from an increase in early pregnancy loss. Holman developed a biostatistical model of follicular depletion, which has been used for understanding female reproductive senescence (O’Connor et al. 1998; Holman et al. in press a), the biology of the menopause, the perimenopausal transition (O’Connor et al. 2001a), and the evolution of reproductive senescence (Wood et al. in press b). Holman has been studying aspects of child health in non-industrial settings, including determinants of the timing to breastfeeding (Holman and Grimes 2001) and the growth and development of children (Holman and Jones 1998; Konigsberg and Holman 1999). His research in historical demography and paleodemography is aimed at understanding health and mortality in past populations. He has developed new statistical methods for estimating age-at-death distributions from imperfect age indicators (Holman et al. in press b; Konigsberg and Holman 1999), and recovering population growth rates from paleodemographic observations (Wood et al. in press a).