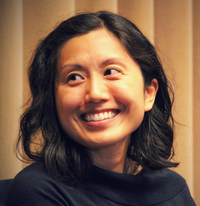 Carole Lee studies the allocation of major resources among scholars – in particular, co-authorship relationships, publication outcomes, grant awards, and scientific prizes – and their distribution across the scholarly population by gender and race. To study these, she and her collaborators have been looking at co-authorship relationships across the JSTOR corpus (by gender), grant award outcomes at the National Institutes of Health (by race), grant award outcomes at other intramural agencies (by gender, degree type, and seniority), and the awarding of scientific prizes (by gender). Her collaborators include faculty in Statistics, Information Science, Sociology, and Biology, as well as organizations such as the Center for Scientific Review at the National Institutes of Health, the Association for Women in Science, and the American Institute of Biological Sciences. The mission behind her work, as a philosopher of science, is to understand scientific practice with an eye towards improving it. Because of the practical, policy-oriented nature of her work, she is glad to have connections – through her research and service – to a number of stakeholder institutions, including the Transparency and Openness Promotion Guidelines, NIH, Canadian Institutes of Health Research, Doris Duke Foundation, and Templeton Foundation.

There are a number of ways her research connects with CSDE’s focus on Demographic Measurements and Methods. She has worked towards introducing new concepts and methods for measuring biases in the allocation of journal pages and grant dollars. In recent work, she introduced the notion of “commensuration bias” in grant and journal review, where these biases can work against not only women, racial/ethnic minorities, and junior researchers – commensuration bias can also lead other problematic patterns in publication and funding across science (Lee 2015). Along these lines, she and her collaborator Elena Erosheva (Department of Statistics) created new methods for measuring commensuration bias. In recognition of these ideas, they won First Prize in the category of Most Creative Idea for Detection of Bias in Peer Review in the Center for Scientific Review’s America COMPETES Act Challenge competition (National Institutes of Health). This work has been published in Science Advances and covered by the media, including by the Chronicle of Higher Education.