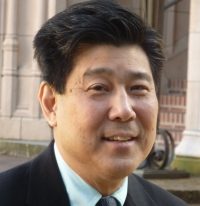 Ross L. Matsueda’s research interests include criminology, juvenile delinquency, deviance, teen childbearing, statistics, methods, and social psychology. He has been involved with two major research projects over the last decade. The first, funded by NIH and in collaboration with Erosheva, Social Work, Kreager, Penn State, and Telesca, UCLA, examines life course trajectories of substance use and crime. On the methodological side, after showing tha latent class mixture models of trajectories fit individual trajectories poorly, they develop an alternative model that assumes a single age-crime curve, and then estimates departures from that curve using individual-specific parameters of phase (to model onset and desistance) and amplitude (to model level of offending). They model the age crime curve using B-splines, and factor out individual-specific temporal misalignment and amplitude via Bayesian curve registration methods. The initial paper in this series received a revise and resubmit at the JASA. On the substantive side, Matsueda is examining the effects of life course transitions, such as the transition to parenthood, marriage, college, and employment, on substance use and crime. An initial paper using fixed-effects models found support for the hypothesis, identified in ethnographic research, that that within disadvantaged neighborhoods, motherhood can result in a positive transformation of previously delinquent and chaotic lives. The next step will be to examine the effects of fatherhood, which appear to operate very differently from motherhood, and examine whether these results hold for the nation as a whole, or only a disadvantaged subgroup, as suggested by ethnographic studies. Matsueda is also examining the long-term effects (on criminality and socioeconomic outcomes) of parenting during childhood and working during adolescence. A second project, funded by NSF, examines the spatial distribution of crime and violence across Seattle neighborhoods. This project tests social capital and collective efficacy theories using data collected on 5,000 Seattle residents within 123 census tracts.