Ali Mokdad Discusses Rate of Deaths Due to Gun Violence in the U.S. 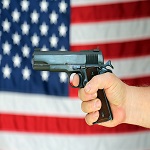 Affiliate Ali Mokdad, Professor of Global Health at the Institute for Health Metrics and Evaluation (IHME), was quoted in an NPR story addressing how our nation compares to the rest of the world when it comes to fatalities caused by gun violence. The recent high school shooting in Parkland, Florida highlights the all-too-common issue of gun violence in the U.S., which—with 3.85 deaths per 100,000 people—ranks 31st in the world for deaths caused by gun violence as of 2016. This statistic was produced IHME, which keeps track of death rates and causes of death by country as part of its Improving Methods to Measure Comparable Mortality by Cause project. Said Mokdad of the U.S. ranking for gun violence, “It’s a little surprising that a country like ours should have this level of gun violence. If you compare us to other well-off countries, we really stand out.” The full article is accessible below.