Ali Rowhani-Rahbar Examines Loaded Handgun Carrying Behaviors in the US 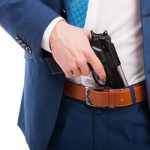 Affiliate Ali Rowhani-Rahbar, Professor of Epidemiology, co-authored a recent study that examines the nature of loaded handgun carrying in the US. From a nationally representative survey of adults conducted in 2015, lead author Rowhani-Rahbar and his co-authors were able to assess carrying behavior among handgun owners within a 30-day period, as well as concealed carrying in the context of individual state carrying laws. The outcomes of the study—which has been featured in the Washington Post and US News, among other sources—indicate that an estimated nine million handgun owners carry loaded weapons on a monthly basis, while three million carry them on a daily basis. Of those respondents who carry, the majority cited protection as their primary motivation for doing so. The full study is available below.