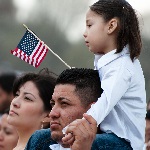 CSDE Affiliate and UW Professor of Sociology Charles Hirschman joined other researchers and officials in studying how immigration impacts the US economy. The resulting National Academy of Sciences report, The Economic and Fiscal Consequences of Immigration, sheds light on the gap between perceived and actual costs of immigrants. The panel’s work has spread throughout media channels in the wake of recent political debates over immigration reform–the New York Times weighs in on the findings with this opinion piece, while UW itself is spotlighting its researchers’ contributions to the panel here. You can read the full study below.