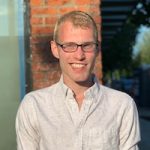 CSDE Fellow Connor Gilroy, PhD Student in Sociology, was awarded the Graduate School Award for Distinguished Thesis in the Social Sciences for his thesis titled “How Distinct is Gay Neighborhood Change? Patterns and Variation in Gayborhood Trajectories.” Gilroy, who is also the co-leader of CSDE’s Computational Demography Working Group, did a significant part of the work for his thesis while a CSDE fellow.

Gilroy believes that residents of gay neighborhoods, and everyone who cares about their future, deserve an accurate account of what these spaces were like in the recent past, and how they’ve changed up until now. He hopes that his work shifts the narratives we have about change — gay neighborhoods aren’t “disappearing,” and it’s wrong to ascribe the changes we do see in some places to their special status as enclaves for LGBTQ people. Instead, we need to shift our focus to local urban forces that impact gay and other neighborhoods alike. Capitol Hill, for example, might have more in common with Belltown in Seattle than Boystown in Chicago.

According to Gilroy, his adviser, CSDE Affiliate and Professor & Chair of Sociology Kate Stovel, had a significant impact on his work by pushing him to think more generally and abstractly about the concrete empirical puzzles he deals with in this work.