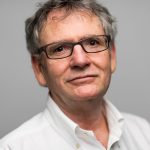 Affiliate James Anderson, Research Professor at the School of Aquatic and Fishery Sciences, co-authored a study in the January issue of Pacific Science that assesses the success of a feral cat control program on Rota Island. Rota Island—part of the Commonwealth of the Northern Mariana Islands in the northwestern Pacific—is home to the critically endangered Mariana crow, which the feral cat program was designed to protect. The authors found that the program reduced cat abundance in the first year and a half, after which point the population grew slightly and then was maintained. Given these results, the authors suggest employing a strategy that focuses on areas with high crow activity, rather than one that seeks to control the feral cat population across the entire island. The full article is available below.