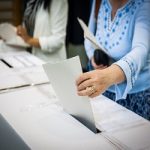 Affiliate Katie Bird, Associate Professor of Politics, Philosophy and Economics at UW Tacoma, co-authored a study that explores whether people will vote more with the addition of more ballot drop boxes, which is required by a new state law in Washington. The study —which Baird and her coauthors presented to the State Government, Elections, and IT Committee on October 27— compared voting behavior in 2015 to that in 2016, when the number of drop boxes increased from 10 to 43. The outcomes suggest that while there may be an increase in voter turnout with the addition of more boxes, it is not likely to be driven by typically low-turnout groups. The study is a product of Project Vote Washington, a team of five economists and political scientists—of which Baird is a member—that examines voting outcomes to inform Washington voting policy. In a recent HeraldNet article that discusses the study, Baird said, “What we know is drop boxes are incredibly popular among voters. We found the low voting groups did not seem to be as influenced by boxes.” A draft of the full study is available below.