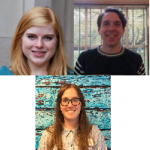 The 2017 Population Association of America meeting is just around the corner, and CSDE’s speakers are primed to practice their presentations in front of an audience.

More information is available below. Come by this Friday to learn about their work on demography’s cutting edge!

*Please plan to allow around 15 additional minutes after presentations for audience questions and feedback.

Christine is a graduate student with the Department of Sociology. Her research focuses on internal migration within the United States, its associations with individual and familial socioeconomic outcomes, and the extent to which race and gender play into these relationships. She is also involved with several independent and collaborative research projects looking at second generation Great Migration migrants, segregation and neighborhood attainment, and the influence of paternal incarceration on maternal neighborhood outcomes. Christine has presented her work at conferences including the American Sociological Association’s (ASA) annual conference, the Population Association of America (PAA) annual conference, and the Pacific Sociological Association (PSA) annual conference.

Abstract: Over the last half century, the literatures on racial segregation and sprawl have largely been kept separate. This paper aims to rectify this deficit by conducting an analysis of the sprawl of populations in four race/ethnicity categories (white, black, Asian and Latino) in 52 large US metropolitan areas, 1990 to 2010. Findings indicate that white flight remains a dominate feature of the residential landscape despite increasing neighborhood diversity in inner ring suburbs. These results provide a framework for assessing the future trajectories of neighborhood change, urban spatial development and segregation as the relative share of the white population continues to fall into the next decade and beyond.

Lee is a third year graduate student in the department of geography and CSDE fellow. His work focuses on neighborhood change and migration in the US context with an emphasis on methodology and data visualization.

Abstract: The UN issued official probabilistic population projections for all countries to 2100 for the first time in July 2015. This was done by simulating future levels of total fertility and life expectancy from Bayesian hierarchical models, and combining the results using a standard cohort-component projection method. The 40 countries with generalized HIV/AIDS epidemics were treated differently from others, in that the projections used the multistate Spectrum/EPP model, a complex 15-compartment model that was designed for short-term projections of quantities relevant to policy for the epidemic. Here we propose a simpler approach. Changes in life expectancy are projected probabilistically using a simple time series regression model on current life expectancy, HIV prevalence and ART coverage. These are then converted to age- and sex-specific mortality rates using a new family of model life tables designed for countries with HIV/AIDS epidemics that reproduces the characteristic hump in middle adult mortality. These are then input to the standard cohort-component method, as for other countries. The method performed well in an out-of-sample cross-validation experiment. It gives similar population projections to Spectrum/EPP in the short run, while being simpler and avoiding multistate modeling.

Jessica is a PhD student in the Department of Statistics and a CSDE BD2K Fellow. She currently works with advisor Jon Wakefield on Bayesian space-time methods for estimating and projecting under-five mortality in countries without vital registration. Previously, she worked with Adrian Raftery on Bayesian projections of life expectancy in the presence of a generalized HIV/AIDS epidemic. She received her B.S. in actuarial science and M.S. in statistics from Auburn University.