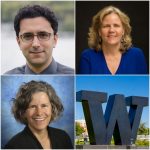 These faculty-led teams have been awarded $50,000 to address the critical components of population health. Affiliate Ali Mokdad, Professor of Global Health and Vice Chair of the Population Health Initiative, said of the awardees: “We believe each of these projects has the potential to make significant progress towards reducing disparities and improving population health at the local, national and international levels.” Other team members include:

The Population Health Initiative seeks to expand University of Washington’s capacity to address challenges to the health and well-being of of populations through collaborative and interdisciplinary research. Learn more about the Initiative and its pilot research grant awardees below.