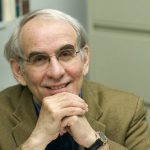 Last Friday, professors, students, scholars, family and friends gathered to honor Charles Hirschman on the occasion of his retirement. Charlie, as he is better known, retired as Boeing International Professor in Sociology and the Evans School of Public Policy in September 2017. Thankfully for many of us, retirement for Charlie is a relative state of being. He is currently Professor Emeritus of Sociology at UW comes to the office almost every day to work on the many projects that still remain on his desk!

Charlie’s event included a symposium titled Looking Back to Find the Future: Reflections from Social Science for a Changing World and was then followed by a celebratory reception emcee’ed by UW’s former chairs of Sociology Jerry Herting and Stew Tolnay, including a tribute to Charlie’s career and contributions titled Travels with Charley. During the symposium panelists tackled the social science questions that animated Charlie’s career, including provocations and reflections from distinguished visitors Patrick Heuveline, M. Giovanna Merli, Alejandro Portes, Kenneth Prewitt & Marta Tienda, and UW Professors Sandra Archibald, Dan Chirot, Sara Curran, Mark Long, Celia Lowe, Adrian Raftery and Katherine Stovel. While Charlie’s intellectual impact to the field of Sociology is remarkably broad and deep, the event highlighted the sheer number of students and scholars who were moved and shaped by Charlie’s guidance, mentorship, generosity and humanity.

If you would like to leave a tribute for Charlie, the portal is still open and can be found at the bottom of the event page. We will be collecting and then sharing by the end of the month. In lieu of a gift, please consider a donation to the Charles and Josephine Hirschman Endowed Fund for Graduate Research.

Here are a few more details about the program and Charlie.

Hirschman’s teaching and research focus on demography, immigration and ethnicity, and in the United States and Southeast Asia. He has authored or edited four books (most recently, From High School to College: Immigrant Generation, and Race-Ethnicity, Russell Sage, 2016), more than 125 articles/book chapters, and 50 book reviews/comments. He has been elected President of the Population Association of America (2005), Chair of Section K (Social, Economic, and Political Sciences) of the American Association for the Advancement of Sciences (2004-05), and is an elected fellow of the American Academy of Arts and Sciences and of the American Association for the Advancement of Science.  Over the years, he has chaired at least 30 PhD committees, 20 MA committees, and mentored 11 postdoctoral fellows.

Looking Back to Find the Future
Reflections from Social Science for a Changing World
Friday November 16, 2018 – Walker-Aimes Room, Kane Hall

12:30pm
Welcome
Robert Stacey Dean of the College of Arts & Sciences
Sandra Archibald Dean of the Evans School of Public Policy & Governance
Katherine Stovel Chair of the Department of Sociology