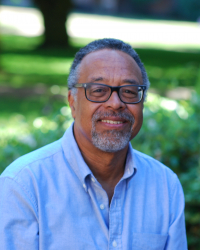 Robert Crutchfield is a Professor Emeritus of Sociology and has an affiliate appointment in the School of Social Sciences at The University of Queensland in Australia.  He received his BA from Thiel College in Pennsylvania, and his MA and Ph.D. from Vanderbilt University.  He has served  two terms as department chair.  His research is on labor markets and crime, neighborhoods and crime, and race, ethnicity and the criminal justice system.  Crutchfield’s book, Get A Job:  Labor Markets, Economic Opportunity, and Crime was published by New York University Press in 2014.

Crutchfield is a Fellow of the American Society of Criminology (ASC), and a University of Washington Distinguished Teaching Award winner.  He was elected Vice-President of the ASC, Chair of the American Sociological Association’s (ASA) Crime, Law, and Deviance Section, and to the Council of the ASA.  He served on the National Academy  of Sciences’ Committee on Law and Justice (CLAJ) between 2005 and 2011.  He currently chairs CLAJ.  Crutchfield has been on several National Academies study panels including the Committee to Improve Research and Data On Firearms, the Committee on Assessing the Research Program of The National Institute of Justice, and the Committee on the Causes and Consequences of High Rates of Incarceration.  He now is on the Reducing Racial Inequalities in the Criminal Justice System panel.   He served on US. Department of Justice’s Office of Justice Program’s Science Advisory Board, the Board of Directors of The Sentencing Project, the Washington State Juvenile Sentencing Commission, and the Board for the Washington State Council on Crime and Delinquency. He is currently on the Seattle Housing Authority’s Board of Commissioners.   Crutchfield is a former juvenile probation officer and worked as a Parole Agent for the Pennsylvania Board of Probation and Parole.