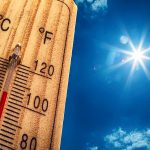 According to research by affiliate Adrian Raftery and colleagues, global temperatures are likely to surpass the 2 degrees Celsius “tipping point,” beyond which the effects of climate change will be severe, before the end of the century. Based on statistically-derived projections, Raftery, a Professor of Statistics and Sociology, and his co-authors find a 90% chance that temperatures will increase by 2 to 4.9 degrees Celsius this century. Their work has been featured in a number of major news outlets, including CNN, News Week, Scientific American, The Guardian, and the Washington Post.

Of particular interest to demographers, the authors note that population growth will not be the primary factor driving future warming. Rather, the extent to which we can decrease carbon intensity–the amount of carbon produced per dollar of economic activity–will determine whether we can keep global temperature rise below 2 degrees Celsius.

The UW News story on their work, which links to the authors’ published analysis in Nature Climate Change, is available below.