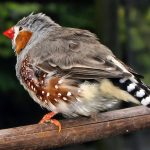 In a pioneering experimental study on the effect that paternal age has on offspring’s lifespan and telomere length, Affiliate Dan Eisenberg, Associate Professor of Anthropology, and a team of researchers found that zebra finch embryos with older fathers had shorter telomeres than counterparts sired by younger fathers and the same mother. The telomeres from embryos fathered by older finches were about 10 percent shorter than those with a younger father.