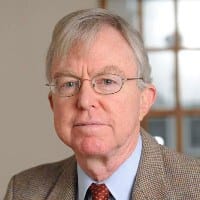 This study provides a new examination of the incentive effects of welfare rules on marriage and cohabitation among low-income women.  Focusing on the AFDC and TANF programs and how they treat the presence of men in the household, the study notes that the eligibility and benefit rules are based more on the biological relationship between the children and any male in the household than on marriage or cohabitation per se.  A new empirical analysis of the effect of 1990s welfare reforms on family structure that matches these rules correctly shows that the effects of those reforms on marriage and cohabitation differ depending on whether the union formation in question involved men who were biological fathers of the children.  The effects of reforms which involved harsh work-related policies had more effects than reforms which involved family structure per se.

Robert Moffitt is the Krieger-Eisenhower Professor of Economics at Johns Hopkins University, where he is also an Associate of the NICHD-funded Hopkins Population Center.  Professor Moffitt’s research focuses on the U.S. welfare system and its effect on low income families and children as well as on general issues related to poverty, and he has conducted research on statistical methodology, including methods for conducting causal inference with observational data and on the estimation of models of social interactions and networks. He was the 2014 President of the Population Association America and is a recipient of an NICHD MERIT award.